Plasma is a layer-2 scaling solution that was originally proposed by Joseph Poon and Vitalik Buterin in their paper Plasma: Scalable Autonomous Smart Contracts. It is a framework for building scalable applications.

Plasma uses a combination of smart contracts and cryptographic verification. Together, these enable fast and cheap transactions by offloading these transactions from the main Ethereum blockchain into a "side" chain (sometimes referred as child or plasma chains). These side chains periodically report back to the main chain and use it to settle any disputes (almost like a higher court).

Why it is needed

According to Vitalik Buterin,
it is a "bad idea" to build sophisticated features into the base layer of the blockchain, it would create a high level of governance overhead as the platform would have to continually discuss, implement and coordinate newly discovered technical improvements. The time intensive task to add a new feature into the base protocol might cause Ethereum to stagnate. We should not only be relying on changes to the base protocol to continue progressing Ethereum. I do think that as blockchains become more and more mature, layer 1 will necessarily stabilize, and layer 2 will take on more and more of the burden of ongoing innovation and change.

How does Plasma work?

The Plasma structure is built through the use of smart contracts and Merkle trees, enabling the creation of an unlimited number of child chains - which are, essentially, smaller copies of the parent Ethereum blockchain. Each chain is designed to work in a singular way, serving different needs by coexisting and operating independently. On top of each child chain, more chains can be created and this is what builds a tree-like structure.

Deposits and withdrawals of Plasma chain funds with state transitions is enabled by fraud proofs. This ensures enforceable state and exchangeability. It also allows the processing of a greater number of transactions with less data loading on the basic platform. Any user can send funds to another, including those from a different set of participants. These fund transfers can be paid and withdrawn in the native platform coin.

The communication between the child chains and the root chain is secured by fraud proofs. Each child chain has its own mechanisms for validating blocks and a particular fraud-proof implementation, which can be built on top of different consensus algorithms. The most common are Proof of Work, Proof of Stake, and Proof of Authority.

The fraud proofs ensure that in case of malicious activity, users are able to report dishonest nodes, protect their funds and exit the transaction (which involves an interaction with the main chain). In other words, fraud proofs are used as a mechanism through which a Plasma child chain files a complaint to its parent chain or to the root chain.

These proofs use an interactive funds-withdrawal protocol. In order to withdraw a certain amount of funds, an exit time is needed. The exiting party must confirm the outputs via UTXO model requesting a withdrawal. Network participants can then submit a bonded proof that has to be confirmed and tested if any funds have been spent. If the event appears to be wrong, it is treated as fraudulent, and the confirmation is cancelled. With time, another bonded round allows the withdrawal to happen, bonding to state before a committed timestamp. An incorrect Plasma chain can be quickly exited by participants. In case of attack, participants can quickly exit and save their costs, ensuring security within the system.

If Alice keeps 1 ETH in a Plasma chain, for instance, it gets recorded into a block, whereas the consensus is met due to fraud proofs. Further commitments are enforced and submitted on the base chain, and her funds are held in its smart contract: 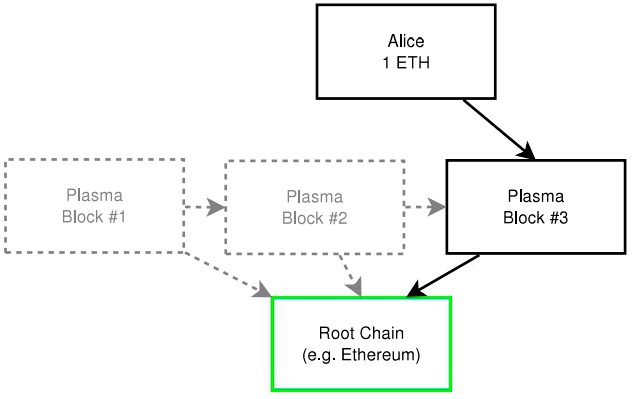 Undoubtedly, plasma is a good solution for scalability issues but Plasma does have some drawbacks. Each new plasma iteration reveals a new research problem that needs to be addressed, leading to multiple Plasma variants that navigate deployment trade-offs in different ways. We will compare these different variants in detail below but let's first compare the pros and cons of plasma and it's variants.

Many plasma variants have their own set of drawbacks such as: Plasma MVP has time constraints, is a less than ideal user experience, and is vulnerable to network congestion. Plasma Cash relies on non-fungible tokens (NFTs) to function which requires heavy transaction histories. You will have to keep track of the value and have to be constantly collecting proofs of non-inclusion, and so when you transfer ownership of the NFT you have to transfer its history as well.

There isn’t any single project called "Plasma". Instead, there are lots of different projects that use the tools provided by the Plasma framework/specification.

Currently there are four main distinct versions of the protocol:

Plasma MVP relies on confirmation signatures because withdrawals are processed in order based on the position of the output being withdrawn.

Users need to sign a signature before making a transaction, wait to see the transaction included in a valid block, and then sign another signature. These second signatures must also be included within a plasma block, reducing block space available for more transactions!

Note: Confirmation signatures make for pretty bad user experience. More Viable Plasma, also known as MoreVP, is an extension to Minimal Viable Plasma that removes the need for confirmation signatures. MoreVP modifies the process through which users can withdraw their funds. The ordering of each withdrawal becomes based on the position of the youngest input to the transaction that created an output.

Let's compare pros, cons and use cases for each model now